A Perfect Day In Antarctica

In Antarctica it is easy to rate every day as perfect because the landscape around you is so utterly magical. So, what is the ultimate perfect day in Antarctica?

Just knowing that you will be one of only 30,000 people to visit Antarctica in any given year, unlikely to see any other tourists during your trip (other than the ones on your own ship) already sets you up for a perfect day.

My trip got off to a great start with near perfect conditions crossing the Drake passage, Antarctica bound. This stretch of water is known to be hazardous and stormy and many a sailor has lost their life here. You are considered very lucky if your ship makes it across without being tossed around and without getting sea sick. 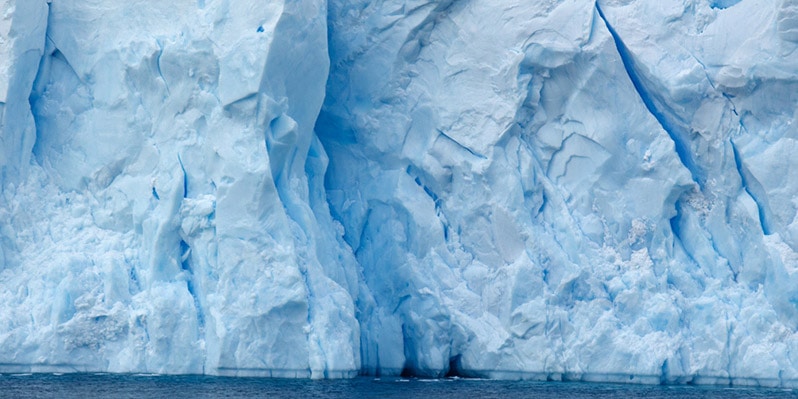 I woke up early to take a stroll round the top deck of the cruise ship, camera in hand, to capture any wildlife on this perfect day in Antarctica. As we cruised down the Lemaire Channel, Antarctica revealed how spectacular it could be.

The panorama was a brilliant azure, the sun was beaming down and there wasn’t a breath of wind in the air. The snowy mountain peaks of the peninsula reflected perfectly in the mirrored ocean below. Light sparkled on the top of the flat, calm water.

The view was dominated by huge tabular icebergs, high ice cliffs, and steep glaciers. On closer inspection of the commanding and majestic icebergs I could make out small black dots, gatherings of penguins lined up in their black tailcoats and white shirt fronts, standing to attention. 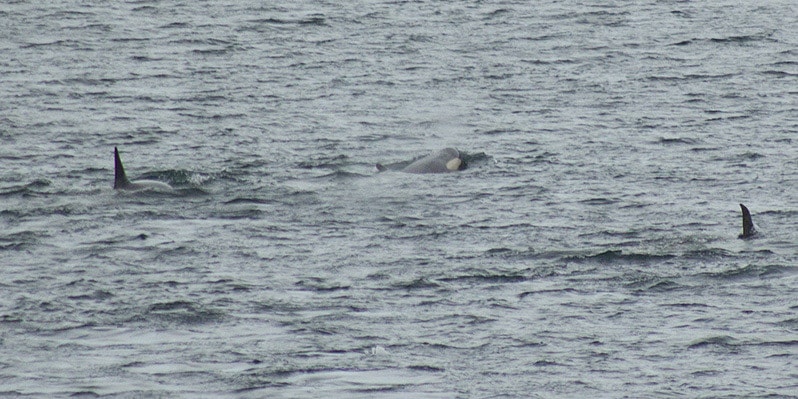 I was lucky enough to spot a school of Orca’s (Killer Whales) at the bow of the ship. I watched as their striking dorsal fins, reaching up to six feet high, cut through the water at some speed. Occasionally I caught glimpses of the white patches along the sides of their bodies.

There are approximately 100,000 Orcas in the wild, 70,000 of which frequent Antarctic waters. Orcas are extremely social mammals. They live in family pods and form the most stable family groups of any animal species. Different groups have specific hunting techniques and unique sounds that are passed down over many generations. This certainly was a perfect day indeed.

After breakfast, we took the Kayaks out. I drove my paddle through the icy water. The air was still and the ocean, flat as a pancake. I could see icebergs towering before me they were, even more, imposing up close and advanced in a variety of shapes.

Some were at least 25 meters high. Each berg came in a different hue, whites, greens, turquoise, blues. An iceberg’s buoyancy is dependent on the amount of air that is trapped within it. 50% to 99% of an iceberg can be hidden below the water’s surface.

The most dangerous icebergs, ‘growlers’ lie mostly below the surface with only a small amount showing above. Far in the distance, we were able to make out the faint rumblings of an avalanche. 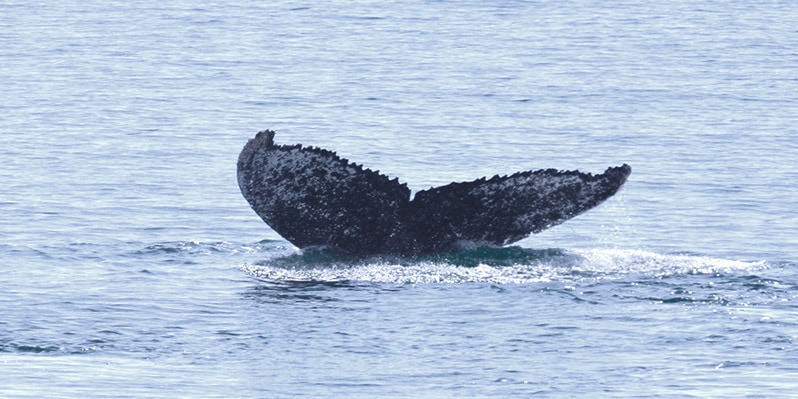 We also took to the Zodiacs in search of more wildlife. We were lucky enough to find some Humpback whales and were able to track one as it it dived and resurfaced. It gave us a flick of its famous tail fluke a few times before slipping under the surface for good.

Our resident videographer captured some awesome footage of three Humpbacks “bubble netting” Krill. This feeding technique involved the whales diving below a shoal of Krill and then swimming toward the surface in a spiral, blowing bubbles and driving the Krill into the center of a circle of bubbles.

The whales then burst up to the surface with their mouths open to gorge on their prey. On our way back to the ship we also spotted a Leopard Seal lazing on an ice floe. A formidable predator but so cute and adorable. Seagulls rested on the rocks, surveying the world around. This day was getting better and better. 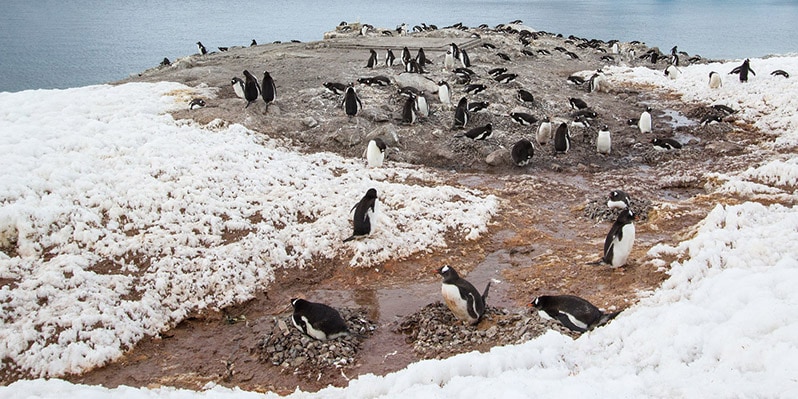 In the afternoon we were shuttled to the uninhabited shores of Neko Harbor, named after a whale factory ship that operated along the Antarctic Peninsula in the early 1900s. As we approached small gangs of penguins could be seen diving and darting in the crystal clear shallows. An ungodly stench hung in the air, assaulting our nostrils.

The stink was generated by the resident Gentoo penguin colony guano…also known as poop! Hundreds of penguins could be seen nesting on low-level rocky outcroppings or waddling about in the snow.

The paradox of penguins is that they are so graceful and streamlined as they propel through the polar waters, but on land they totter across the snow as if they might be tipsy, often slipping and sliding on their bellies when the potholes in the icy terrain get too much of a challenge. 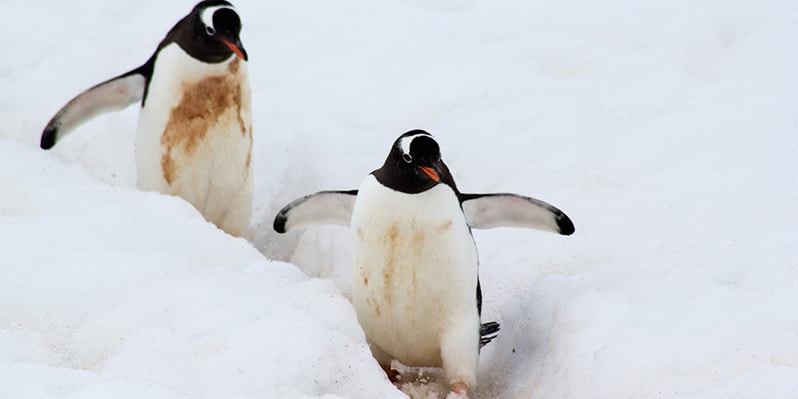 We spent time squatting at the edge of the colony watching their behavior. It was coming to the end of the breeding season, so the majority of penguins were still protecting eggs or recently hatched chicks.

They are romantic little creatures, for once a penguin finds its mate they stay together forever. They also exhibit a great sense of gender equality as parents share the responsibilities of egg sitting and hunting and are highly nurturing parents.

Although Gentoo penguin numbers are increasing on the Antarctic Peninsula they have plummeted elsewhere on the continent. Like all penguin species, they are considered threatened and are protected by the Antarctic Treaty. 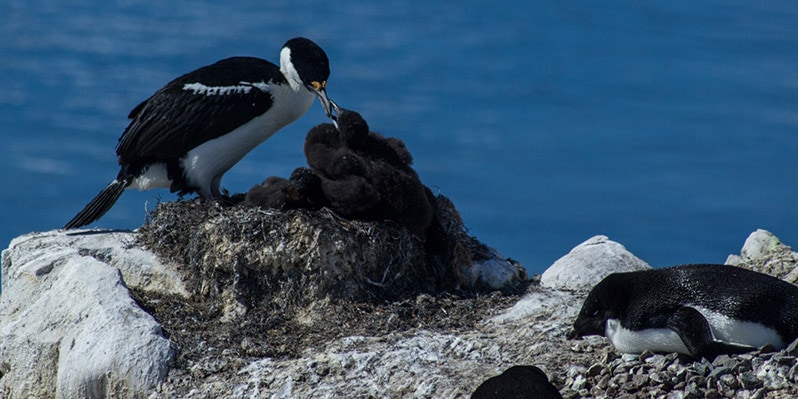 We also spotted Blue-eyed shags feeding their chicks nestled within the penguin colonies. In the water, Sea Lions, Leopard Seals, and Orca (Killer Whales) are all predators of the penguin.

On land, there are no predators to the adult penguins but they are under constant threat from Skuas, who work in pairs to steal their eggs or snatch their chicks. This was something we witnessed first hand where the penguins were nesting, an unfortunate part of the food chain. 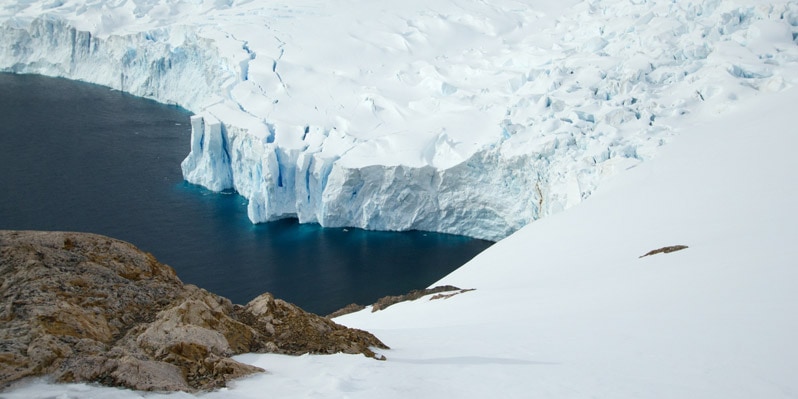 Our perfect day in Antarctica continued as we explored Antarctica further by climbing to the summit of a nearby headland. From this height we had a magnificent view of the harbor and surrounding bay. The remoteness was staggering.

We were enveloped in an uninterrupted expanse of blue and white and you could see the effects of ice calving on the ice cliff far below. Calving occurs when large chunks of ice break off at the edge of a glacier and is usually accompanied by a loud booming sound. Acting like kids, we took the quick route back down the mountain by sliding down on our backs in the snow.

On the way back to the Zodiacs we chanced upon two Weddell Seals taking a well-earned rest. These mammals are the most southerly breeding animals in the world and spend most of their time hunting under the ice in the polar region. They are accomplished divers reaching depths of 600 meters for up to 80 minutes at a time.

Back at the ship, we prepared for the traditional polar plunge. Everybody lined up in white robes and slippers at the stern of the ship. Vodka shots were stacked up in ice for a bit of dutch courage. Splash! I was in!

I didn’t feel the cold at first but as soon as my head protruded above the water’s surface I felt an instant chill come over me and I could feel my muscle tissue starting to freeze. I couldn’t climb up the ship’s ladder fast enough! The ocean temperature turned out to be a biting -6 degrees centigrade. A warm swimming pool and some time in the sauna brought my shivering body back up to my normal temperature and I felt the blood in my veins once again. 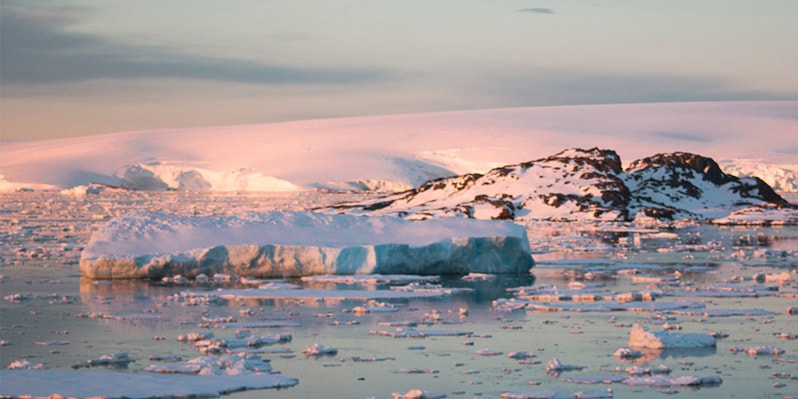 Our perfect day in Antarctica continued as we cruised through the Neumayer Channel. From the Regatta Bar watched the most magnificent sunset, it filled the sky with a pinkish-orange hue and dripped golden light onto the pack ice and ocean below. During the Austral Summer, the Antarctic has 24 hours of daylight.

We watched as the night wore on still bathed in a twilight glow. Then the sun dipped briefly under the horizon before coming straight back up. This truly was a perfect day in Antarctica exploring the icy wilderness in this beautiful part of the world.

If you enjoyed this article you might also like 52 Reasons to Travel to Argentina and learning about Ushuaia, a resort town on Argentina’s Tierra del Fuego archipelago, the southernmost tip of South America, nicknamed the “End of the World.” which is a portal to Antarctica.

I have been a lover of travel from an early age. Some of my favourite trips include: sailing through the islands of French Polynesia, safariing in Kenya, cruising in Antarctica, exploring vineyards in the hills above Cape Town, lazing on the beaches of Zanzibar, backpacking in Thailand and partying in Ibiza. I grew up in the UK and have spent my working life in London and New York working in ecommerce for retail companies including Topshop and Burberry. I recently left my job as part of the digital product team at Saks Fifth Avenue in New York to spend time traveling the world in search of new adventures. I want to inspire people to explore new places by writing about where I have travelled and the experiences I have had.