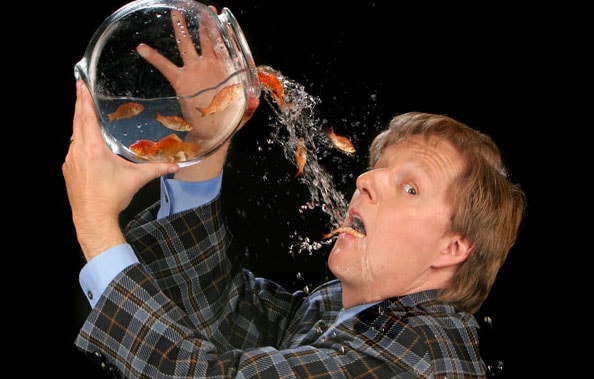 On one of my first trips to Las Vegas a cab driver gave me some decent advice:
“Remember,” she said with a half-smile, “a little Vegas goes a long way.”

It’s not hard to get caught up in the energy of Vegas, as a friend of mine did when he averaged three hours of a sleep a night for the good part of a week.

Drinks
Where else can you head from breakfast or brunch straight to cocktails? Take a short hike next store to the Paris, and find the bar just inside the main entrance and adjacent to the check-in area called Lecentral Bar. It’s one of the premier indoor people-watching spots on the Strip – a few years back I was at the bar when Steve Schirripa (he played Bobby on the Sopranos) came by with his entourage. The waitress who brought me my Heineken also told me that a few months earlier, basketball Hall of Famer Larry Bird and friends ran up a $300 bar tab and stuck her with a $5 tip. Truth or Vegas gossip? I’ll leave that up to you to decide!

Gambling
If slots are your game, you can find them anywhere and everywhere. If it’s been a while since you sat down at a machine, you’ll be surprised to learn that coins no longer drop down into the tray when you win. Your credits just go up or down depending how you’re doing, and when you cash out, you’ll need to print out your ticket and get paid at either a kiosk or the cashier window.

If you prefer table games, head out of the Paris north past the Flamingo, over the escalator bridge at Flamingo Road and into the Imperial Palace. Near the back of the casino the blackjack dealers are dressed as celebrities (Whitney Houston, Michael Jackson etc.) and they sing and dance and take your mind off the fact that your bankroll might be dwindling.

Take in a Show
Next to the Imperial Palace is Harrah’s, home of the best comedy/magician in the city, Mac King. If you scrounge around a bit you can usually get a half-off coupon, but even at full price (less than $20) it’s worth it. Comes with a drink too. Slip the usher a five and you can get a seat down front, which helps to get a good look at the close-up special effects. Shows are Tuesday through Saturday at 1pm and 3pm.

Dinner
Since Mac King’s show will keep you away from the slot machines and tables for a couple of hours, there should be money left for a decent meal. There are hundreds of options, but you might want to give Bouchon at the Venetian a good look. When you get to the massive Venetian, you’ll have to ask directions (it’s down a corridor, up an elevator and down another corridor), but worth the cardio-beneficial walk.

Many of the top restaurants in Vegas have diva chefs.  Bouchon’s is Thomas Keller, who was named the country’s No. 1 chef by Time Magazine, has enough best-chef plaques to sink one of the gondolas at the fake canal that surrounds and winds through the Venetian.

Dueling Piano Bar
A great way to end your evening is at Harrah’s dueling piano show. It’s located just inside the door that leads to the outdoor Carnival Court that separates Harrah’s and the Imperial Palace. The at-times raucous show doesn’t get rolling until 9 and lasts until 2 a.m., but you can come and go as you please. There’s no cover on weekends, but the drinks are a bit pricey.

Unless you’re an exhibitionist who doesn’t mind taking off some of your clothes in front of a few hundred people hooting at you, it’s a good idea to keep it to yourself if you happen to be celebrating your birthday.

About the Author Larry Houser